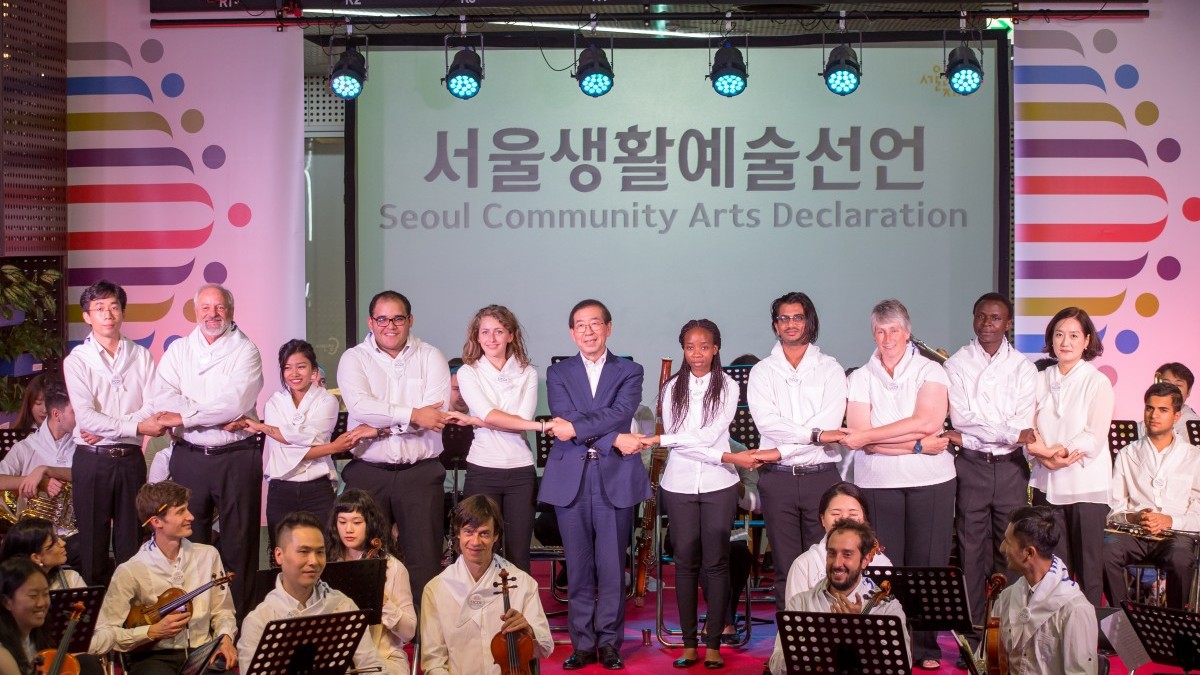 In recent years, a number of nations and world cities have begun incorporating measures of happiness and lifestyle satisfaction into their benchmarks of national progress. While happiness is often linked to economic prosperity, other influential factors – such as a sense of identity, and levels of trust within the local community – have often been overlooked. Seoul’s City government is committed to raising the wellbeing of its citizens and sees community arts participation and the enjoyment of culture as key to this.

Historically there have been barriers to some forms of cultural participation in Korea, as the former authoritarian state system often made it difficult for ordinary people to voluntarily participate in community activities. In the early 2000s, as Korean society entered the information age, the internet presented new opportunities to build community networks. As a result, the number of local clubs and societies has greatly expanded, alongside the recognition of the importance of cultural participation. In 2013, the right to enjoy culture was enshrined in South Korean law as a basic human right. The meaning of culture was expanded to cover all parts of an individual’s life, not limited to the arts, and linked to education, welfare, the environment and human rights. In line with this policy, the Seoul Metropolitan Government now actively supports citizens’ engagement in cultural and community activities.

The Community Arts Campaign is an ongoing project to encourage local community arts clubs and festivals across the city. It aims to make art enjoyable for all, and make local people feel more connected to their communities. Organised by the City government and the Community Arts Division of the Seoul Foundation for Arts and Culture, it supports a variety of community arts initiatives, offering platforms and places where people can create and enjoy art. It also identifies and supports community arts leaders and facilitators. The City of Seoul refers to this as an enhancement of civic power and an opportunity for local artists to grow and develop together.

Launched in 2017 the project has identified more than 2,000 community arts clubs across Seoul’s 25 districts. Among these, 570 clubs have actively led the campaign. The campaign incorporated the existing Community Arts Orchestra Festival, led by 50 community arts orchestras at the Sejong Center for the Performing Arts, which celebrated its fourth anniversary in 2017. This has since been developed into an international festival with the participation of community artists from over 30 countries.